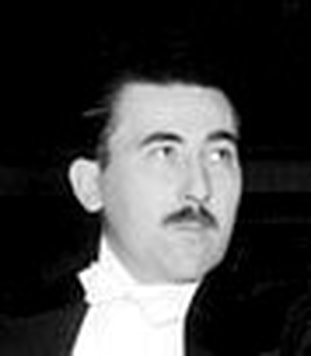 Robert L. Sanders: Composer, Conductor
Born in Chicago, July 2, 1906, Robert L. Sanders had appeared publicly as a piano prodigy before he had reached the age of four. He also showed early evidence of a creative gift. At the age of nineteen he received a  music degree from the Bush Conservatory of Chicago. He then was awarded a Fellowship at the American Academy in Rome to study composition with Ottorino Respighi which led to his going to Paris for piano studies with Guy de Lioncourt.

After his return to Chicago in 1929, he began a career in church music and teaching, with tutelage in conducting by  DeLamenter.  He taught at the Chicago Conservatory, the University of Chicago and the Leadville Theological School.  He was also conductor of the Conservatory Orchestra and assistant conductor of the Chicago Civic Orchestra.  From 1938 to 1947 he was Dean of the School of Music at Indiana University and from 1947 to 1973 was a professor of music at Brooklyn College.

Sanders believed that the body of Protestant hymn tunes, particularly those folk-like-tunes, came close to being a primary source for musical idioms indigenous to the United States. He had been active in the study of Protestant American hymn tunes since 1934, lectured on hymnology and liturgical music, and, in 1937 became an editor of Hymns of the Spirit.  For several years he was also the organist-music director of the First Unitarian Church in Chicago.

Hymns and manipulations of the same musical inclinations "are now very much a part of my expression," Sanders said.   Among the major works of Robert Sanders are Little Symphony in G which won the 1938 New York Philharmonic Award, his ballet L’Ag’ya, premiered at the Hollywood Bowl in 1943, and his Symphony in B-flat for concert band, premiered by the Goldman Band in 1944.

To listen Tap > Below
Sanders' Quintet in B-flat is written in the neo-classic style.
1. Grave - Allegro  2. Adagio  3. Allegro vivo

The influence of Aaron Copland is evident throughout, particularly towards the end of the first movement. The middle movement contrasts lyric solo lines with a muted rhythmic ostinato, and the lively third movement races playfully to finally reach its joyful conclusion.
​To Return &/or Listen to
ARTHUR CUSTER'S CONCERTO
f​or brass quintet
TAP HERE
FOSTERING BRASS CHAMBER MUSIC
​
The score and parts for Robert Sanders' Quintet in B-flat, along with the entire ABQ music library, are available for research and performance from the Oberlin Conservatory of Music Library.
For direct access: ABQ Special Collection @ Oberlin Conservatory Library
TAP HERE
Proudly powered by Weebly