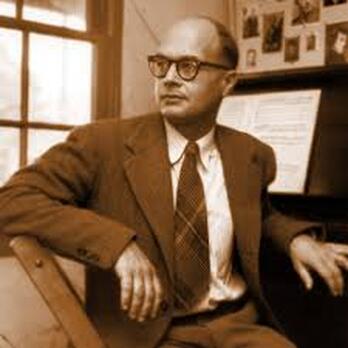 INGOLF DAHL: Composer--Pianist--Conductor--Teacher
Ingolf Dahl (b. 1912  d. 1970) was originally born Walter Ingolf Marcus in Hamburg, Germany to a German father and a Swedish mother. Dahl began his formal music education at the Cologne Conservatory where he studied with Philipp Jarnach from 1930 to 1932.  Then, fearing the oppression of the rising Nazi party, he left Germany for Switzerland where he studied with Volkmar Andreae and Walter Frey at the University of Zurich, where he chose art history as his major and continued his studies in musicology.   [Read More]

This ABQ performance was recorded in Munich by
Bavarian Radio in 1984
Duration: 14' 31"​
​​To listen Tap > Below:
​(There may be a 10 to 20 sec. delay before sound begins.)
In​golf Dahl's ​Music for Brass Instruments (1944)
The first movement is a Chorale Fantasy on 'Christ Lay In the Bonds of Death'
Music for Brass Instruments was a complete departure in style for Dahl. Influences of American folk dance rhythms, as used in Copland's "Rodeo," and of jazz elements emerge in the tonal, cheerful movements of the piece.   It was an instant success; Lawrence Morton commented in a review that Ingolf Dahl had found what he has long been seeking--the matter and manner of his own music.

​From this time, (1944) Ingolf Dahl established himself as an American composer.  Music for Brass Instruments is considered by many to be the first major 20th century work written for brass quintet.  This work  may also have been the closest thing to a 'Dahl hit' after its 2nd movement "Intermezzo" became the signature piece for Armed Forces Radio and the theme music for National Public Radio's 'First Hearing.'
(Above excerpted from: ﻿Ingolf Dahl - 100 Years)﻿
We are grateful to Bavarian Radio
​for allowing  Brass Quintet Forum.com exclusive rights to publish this recording of Ingolf Dahl's Music ​for Brass Instruments as an audio stream solely for non-commercial purposes by this website.
This Bavarian Radio broadcast recording is not to be downloaded.
Next Posting
Thursday, October 29 after 0900 (ET)
William Schmidt's
CONCERTINO
for piano & brass quintet
Composed in 1969 for piano and brass quintet, this 1990 Brass Chamber Music Society of Annapolis performance with pianist Ernest Ragogini and the Annapolis Brass Quintet was recorded by WBJC FM.
TAP FOR BRASS QUINTET FORUM WELCOME PAGE
FOSTERING BRASS CHAMBER MUSIC

The score and parts for Ingolf Dahl's Music for Brass Instruments along with the entire ABQ music library, are available for research and performance from the Oberlin Conservatory of Music Library.