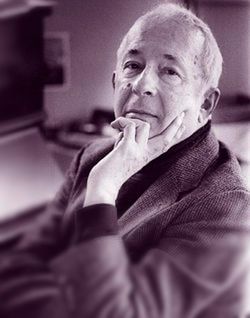 Born in 1921 and raised in the suburbs of Boston, Douglas Allanbrook began studying piano at eight.  Within two years he was playing Bach, Haydn and Czerny.  By thirteen, he started composing;  his first serious piece was entitled On the Death of a Beautiful White Cat .  By the time he was in high school he was churning out larger piano pieces and writing sketches for his Symphony in G Minor.
​
That was the mid-1930's, the height of the Koussevitzky reign at the Boston Symphony.  Every Friday afternoon, young Douglas couldn't wait to get out of school so he could join the queue on the front steps of Symphony Hall. When the doors opened, he'd plunk down his fifty cents and rush up to the second balcony.  In those days Koussevitzky was performing lots of Stravinsky, Bartok, Hindemith, Rachmaninoff and other contemporary greats, and, more often than not, they'd be there in person.

Fresh out of high school,  Allanbrook landed a job teaching music at Miss Mary Wheeler's finishing school in Providence.  There, Gloria Vanderbilt became one of his first piano students.  But the chief attraction for the young composer was the proximity of the WPA-funded Rhode Island Symphony.  Within a year they would play Douglas's early orchestral works, copying out all the parts and paying a fee now and then.

During Allanbrook's third year in Providence,  Nadia Boulanger, the legendary teacher of Copland, Piston, Thompson and Carter, came to town to accept an honorary degree from Brown.  She heard some of Douglas's music and immediately took him under her wing.  He started traveling regularly to Cambridge to study with her and to become part of her coterie of Boston composers:  Harold Shapiro, Irving Fine, Paul Desmarais, Daniel Pinkham.

In the fall of 1942, the Army drafted Allanbrook.  Serving as an infantryman for three years, he fought his way up the Italian peninsula, in the process earning a Bronze Star and starting his lifelong love affair with Italy.

When the war ended, he returned to Boston to enter Harvard and study with Walter Piston.  At Harvard, he composed prolifically;  in Cambridge and Boston, there were numerous performances of his latest works.  Summers were equally fruitful;  he spent them composing among the distinguished artists at the MacDowell Colony in New Hampshire.

Awarded a traveling fellowship from Harvard, he spent the next three years ('48 - '50) honing his composing and performing skills as a protégé of Nadia Boulanger.  He formed close musical friendships within her Paris circle, which included such promising composers as Ned Rorem, Leo Preger and Georges Auric.  Soon Allanbrook's chamber works and orchestral pieces were being performed in France, Germany and Italy.

By 1950 he was back in Italy, studying harpsichord under the great Ruggiero Gerlin, longtime associate of Wanda Landowska.  Douglas spent two extraordinarily creative years in Italy composing, among other works, his first opera, a brilliant setting of Edith Wharton's classic novel, Ethan Frome (MS #07182).

In 1952 he returned to the U.S. to become a tutor at St. John's College in Annapolis.  In addition to continuing his prodigious composing, he performed at St. John's a much-esteemed annual series of piano and harpsichord solo concerts (the latter focusing on stunningly original interpretations of Bach and Scarlatti).  He superimposed this on a regular schedule of polymathic teaching:  Greek, French, Mathematics and a unique seminar series on seminal works in philosophy and literature.  And, in 1998, Houghton, Mifflin published Allanbrook's elegantly written memoirs, See Naples.

An active composer until his death in 2003, Allanbrook's extensive catalogue comprises seven symphonies, two operas, choral works both sacred and profane, four string quartets, numerous chamber pieces for everything from brass quintets to piano-percussion duos, and of course, innumerable piano and harpsichord works.  These compositions have been performed by orchestras and chamber groups across America and Europe, including the National Symphony, Baltimore Symphony, Stuttgart Philharmonic, Bavarian Radio Orchestra (Munich), and the Annapolis Brass Quintet. [1]   Virgil Thomson, Aaron Copland, Walter Piston and Ned Rorem are among the distinguished admirers of Allanbrook's music.  Boosey and Hawkes has published many of his works; CRI and Crystal Records have recorded a number of them.
__________________________________________
Source for the above notes on DOUGLAS ALLANBROOK is the CD  St. Petersburg Academic Symphony Orchestra,  John Allanbrook, conductor |  Music of Douglas Allanbrook:  Symphony No. 2;  Symphony No. 3 - Recorded in June 2004 in St. Petersburg, Russia.

MORE ABOUT ALLANBROOK:
Personal life
Allanbrook was married twice. As recounted in See Naples, his first marriage was in 1952 to Candida Curcio, a theater actress whom he met in Italy; they had a son, Timothy, an architect. Later in 1975, he married the Mozart scholar and future president of the American Musicological Society Wye Allanbrook née Jamison (b. 1943 - d. 2010);  their son John is a musician who has conducted recordings of several major Allanbrook works for Mapleshade Records.

Catalog
His catalog contains 63 mature musical compositions, from his Te Deum (1942) to his String Quartet No. 6 (2002). His main works include seven symphonies, two operas, Ethan Frome and Nightmare Abbey (based on the novel by Thomas Love Peacock), choral works, four string quartets, numerous chamber pieces, and innumerable piano and harpsichord works. During his lifetime, his orchestral works were performed by orchestras across America and Europe, including the National Symphony Orchestra, Baltimore Symphony, Stuttgart Philharmonic, Munich Radio Orchestra and Dublin Radio Orchestra  He had a warm and creative collaboration with the Annapolis Brass Quintet  from 1975 until its disbandment in 1993. [2]
Other performers who gave premieres of his music under his supervision include harpsichordist Ralph Kirkpatrick, violinist Robert Gerle, and the Kronos Quartet.
______________________
[1] Symphony  No. 5 for Brass Quintet and Orchestra by Douglas Allanbrook (1976) was premiered by the Annapolis Brass Quintet and Annapolis Symphony Orchestra, Leon Fleisher, conducting.  Subsequent ABQ performances of this work were with the Stuttgart Philharmonic,  the Bavarian Radio Orchestra, and the Dublin Radio Orchestra.
​
[2]  Brass chamber works composed by Douglas Allanbrook for the Annapolis Brass Quintet:      *(L#:000) - ABQ Music Library Number

FOSTERING BRASS CHAMBER MUSIC
All Douglas Allanbrook compositions listed above, along with the entire Annapolis Brass Quintet Music Library, are available for performance and research from the Oberlin Conservatory of Music.  For direct access to the ABQ Special Collections at Oberlin,  TAP BELOW:
OBERLIN CONSERVATORY MUSIC LIBRARY - ABQ SPECIAL COLLECTIONS
<==BACK
Proudly powered by Weebly