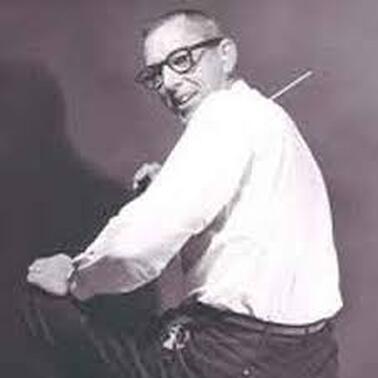 ARTHUR CUSTER, COMPOSER & CONDUCTOR
Arthur Russell Custer, born in Manchester, Connecticut on April 21,1923, showed an early interest in music, playing on a piano in the family home as a child.  World War II temporarily interrupted Custer’s studies, and from 1942 until 1946 he served in the U.S. Navy as a fighter pilot in the South Pacific, attaining the rank of lieutenant junior grade. After leaving the Navy, Custer returned to college, this time taking up the study of music.

Custer began working on his PhD at the University of Iowa in 1956, studying under Philip Bezanson.  He completed his dissertation with Concert Piece for Orchestra and Sextet for Woodwinds and Piano in August of 1959.  Later that year Dr. Arthur Custer moved from Iowa to Spain to serve as Director of Music for the American School in Seville.  Read More
Arthur Russell Custer composed Concerto for brass quintet in 1971.

Arthur Custer's Concerto
for brass quintet
TAP> Below
(there may be a 10-20 second delay before sound begins)
Duration: 09'21"
ARTHUR RUSSELL CUSTER
​(1923–1998)
Custer’s compositions were frequently abstract works that used serially ordered 12-tone techniques and also incorporated improvisation and humor. His pieces often used electronic sounds, particularly pre-recorded tape that was integrated into the performance of the piece.
To Return &/or Listen to
ROBERT SANDERS'
QUINTET IN B-FLAT
TAP HERE
FOSTERING BRASS CHAMBER MUSIC
​
The score and parts for Arthur Custer's Concerto for brass quintet, along with the entire ABQ music library, are available for research and performance from the Oberlin Conservatory of Music Library.
For direct access: ABQ Special Collection @ Oberlin Conservatory Library
TAP HERE
Proudly powered by Weebly