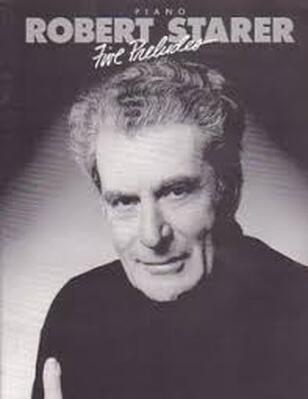 ​ROBERT STARER (1924-2001) received his musical education at the State Academy in Vienna, the Jerusalem Conservatoire and the Juilliard School.  He  became an American citizen in 1957. His stage works include three operas and several ballets for Martha Graham, Herbert Ross, and Anna Sokolow. His symphonic works have been performed here and abroad by major orchestras under Mitropoulos, Bernstein, Leinsdorf, Steinberg, Comissiona, and Ozawa. Honors include two Guggenheim Fellowships and an award from the American Academy and Institute of Arts & Letters.
Five Miniatures
for brass quintet (1949)
Robert Starer

1) Fanfare  2) Air  3) Canon  4) Chaconne  5) March
For brass quintet. New York: Southern Music Publishing Co., 1952. Here. . . is a work for brass quintet whose composer has brought a fresh originality to both method and materials.. Starer's harmonic vocabulary is expres- sive, his rhythmic resources are richly varied, and both appear to trace their ancestry to the folk music of eastern Europe. Only in the rather flat-footed Canon which serves as third movement is there a trace of concession to prevailing tastes in brass music, and here it is simply in the conventional syncopation. The opening Fanfare resembles in no wise the traditional potpourri of trumpet calls; it convinces on musical terms rather than by systolic stimulation. The Air is overlaid on a quasi-ostinato of seven eighths in a 4/4 bar; with the instruments muted throughout, and a good deal of freedom in the melodic line, the total is one of marked sensitivity. A Chaconne with only two variations after the initial statement appears some- what truncated; one would like to have it continued for several more-but that would necessarily eliminate it from this set on grounds of length. The concluding March is infinitely more ingenious than Piket's. Using flutter-tongue, cuivre horns, and an occasional trombone glis- sando, all of which contribute a bit of the grotesque, it never becomes a melange of gadgets. Frequent meter changes (2/4, 3/4, 4/4, 6/4, 7/4) all seem quite natural and do not detract from the marchlike character of the piece. All in all, this is a real contribution to the brass literature
FOSTERING BRASS CHAMBER MUSIC

The score and parts for Robert Starer's  Five Miniatures for brass quintet, along with the entire ABQ music library, are available for research and performance from the Oberlin Conservatory of Music Library.
Direct access to the Annapolis Brass Quintet Special Collection @ Oberlin
Tap Here​​
Proudly powered by Weebly