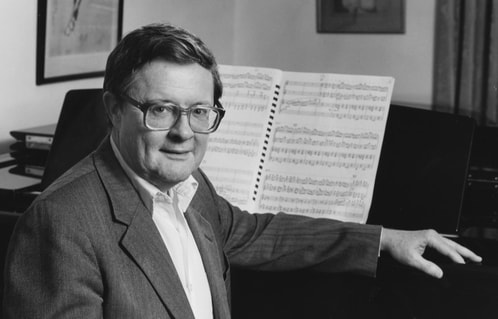 WALTER B. ROSS - Born: October 3, 1936 - Died: June 16 2021.
Walter Ross was a professor of composition and chairman of the music department at the University of Virginia.  He also served as president of the Southeastern Composers' League.  He composed over one hundred works, most of them for wind instruments in a variety of combinations.

​Walter Ross received several awards and prizes for his work, including annual awards from ASCAP and a number of commission grants from the National Endowment for the Arts. 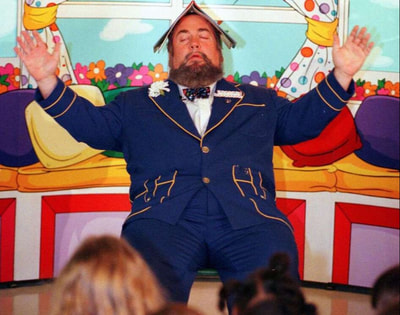 JOHN MCDONOUGH as CAPTAIN KANGAROO, 1998
John McDonough had a wide range of experience as both actor and narrator.  His dramatic roles included the stage, radio and television. For several years he held concurrent positions as actor-in-residence with the chamber music group I'Ensemble  and New York's Cathedral of St. John the Divine. He and the Annapolis Brass Quintet performed and recorded Jerzy Sapieyevski's Aesop Suite and in 1988 composer Walter Ross wrote Oil of Dog especially for the John McDonough and the ABQ.
​
Meet the new Captain Kangaroo:
John McDonough grew up watching one of his television idols, Captain Kangaroo, every morning. When the hour-long show was half over, McDonough would start feeling sad because "that meant there was only a half-hour of the show left.  I wished I could watch the Captain and play with those magical characters all day long."

Beginning in 1997 John could finally do that!
As TV's new Captain Kangaroo, the Connecticut actor  led familiar characters such as Mr. Green Jeans, Mr. Moose, Bunny Rabbit and Grandfather Clock on weekly adventures in and around a colorful new Treasure House. Bob Keeshan's original classic, "Captain Kangaroo," aired on CBS and later PBS for nearly 40 years before going off the air in 1993.  The new version premiered in syndication on nearly 150 stations.
​
"At heart, I'm still a child myself."
John McDonough said that with the broad smile and sudden twinkle of the eye that led producers to select him to replace a living legend. "To me, Mr. Moose and Bunny Rabbit and all the other characters are as real as the Captain is. When I'm on the set, those characters are more than just my friends . . . they're like my very own family."

John Edward McDonough was born in Hartford, Connecticut on January 21, 1954 and died in his Bloomfield, Connecticut home on his sixty-seventh birthday,  January 21, 2021.
Oil of Dog
for narrator and brass quintet
​
Music by Walter Ross
Text by Ambrose Bierce

To listen tap > below
(There may be a slight pause before sound begins.)
Oil of Dog
Short Story by
Ambrose Gwinnett Bierce
To follow the text
tap ​HERE 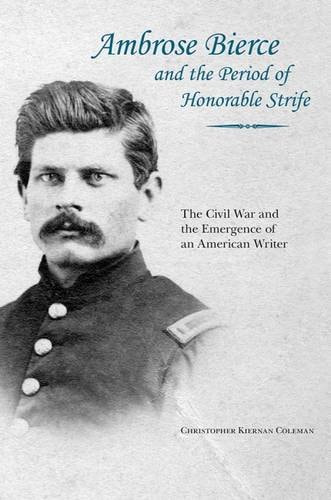 Ambrose Bierce was an American short story writer, journalist, poet, and Civil War veteran. His book The Devil's Dictionary was named as one of "The 100 Greatest Masterpieces of American Literature" by the American Revolution Bicentennial Administration.

Ambrose Bierce
Born: June 24, 1842, Meigs County, Ohio
Died: ? , Chihuahua, Mexico
Composer Walter Ross comments on his Oil of Dog:
I first read Ambrose Bierce's bizarre short story many years ago when I was an undergraduate.  I enjoyed it immensely because of the sophisticated language combined with the sarcasm and cool logic of the story itself -- characteristics of most of Bierce's writing.  Although I liked the story, I could find no musical use for it, since it would not, I believed, make a suitable piece to be sung.

When the Annapolis Brass Quintet  asked me to write a work in 1988 for quintet and actor, I felt that a story told in the first person would work well and remembered Oil of Dog.  The focus of the work, of course, is on the actor, with the quintet adding to the emotion of the story.  The cheerful ragtime at the beginning heightens the sarcasm of the morbid tale, and several other leitmotivs interplay with the words of the actor.
~Walter Ross
FOSTERING BRASS CHAMBER MUSIC

The score and parts for Oil of Dog by Walter Ross, along with the entire ABQ music library, are available for research and performance through the Oberlin Conservatory of Music.
For direct access to the Annapolis Brass Quintet Special Collection @ Oberlin
Tap Here​​
Proudly powered by Weebly