Ronald Roseman, oboist with the New York Woodwind Quintet, is also well-known as a composer.  He studied composition with Ben Weber, Elliott Carter, Karol Rathaus, and Henry Cowell.  Most recent among his numerous works is a setting of Psalm 22 for tenor solo, chorus and orchestra which was performed by the National Chorale at Avery Fisher Hall.

Ronald Roseman's Double Quintet for woodwinds and brass was commissioned by the Norfolk Chamber Music Festival and premiered there by the New York Woodwind Quintet and the New York Brass Quintet with the composer conducting on July 24, 1987. 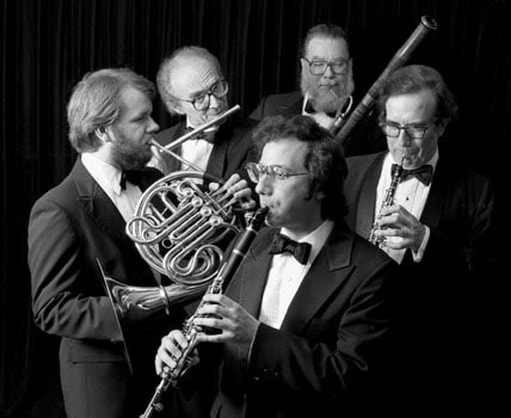 NEW YORK WOODWIND QUINTET
1989 photo from 3 o'clock clockwise:
Ronald Roseman, oboe; Alan Kay, clarinet;
David Wakefield, horn; Samuel Baron, flute;
Donald MacCourt, Bassoon
The New York Woodwind Quintet was formed in 1947.  The ensemble made its New York debut in January 1954 and has maintained its position of pre-eminence in the field of chamber music ever since.  The NYWQ  has performed throughout the United States and in numerous tours of Europe, East Asia, Russia, and in Central and South America.

The New York Woodwind Quintet is Ensemble-in-Residence at the Juilliard.  The group has premiered works by major composers such as Quincy Porter and Elliott Carter and has also led the way in reviving lesser-known works by Franz Danzi and Anton Reicha, among others. 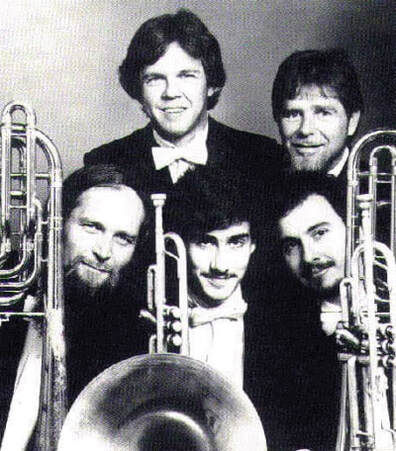 The score and parts for Ronald Roseman's Double Quintet ​for woodwinds and brass, along with the entire ABQ music library, ​are available for research and performance through the Oberlin Conservatory.
For direct access to the Annapolis Brass Quintet Collection @ Oberlin
Tap Here
Proudly powered by Weebly