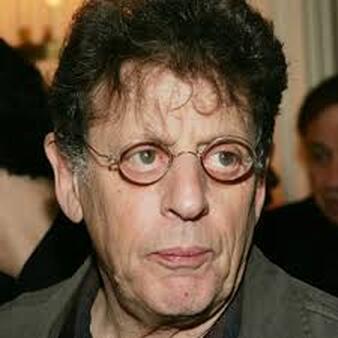 Philip Glass (b. January 31, 1937)  Through his operas, his symphonies, his compositions for his own ensemble, and his wide-ranging collaborations with artists ranging from Twyla Tharp to Allen Ginsberg, Woody Allen to David Bowie, Philip Glass has had an extraordinary and unprecedented impact upon the musical and intellectual life of his times.
​
The operas–-Einstein on the Beach, Satyagraha, Akhnaten, and The Voyage, among many others-–play in the world’s leading houses and rarely to an empty seat. Glass has written music for experimental theater and for Academy Award-winning motion pictures, such as The Hours and Martin Scorsese’s Kundun, while Koyaanisqatsi, his initial filmic landscape with Godfrey Reggio and the Philip Glass Ensemble, may be the most radical and influential mating of sound and vision since Fantasia.

His associations, personal and professional, with leading rock, pop and world music artists date back to the 1960s, including the beginning of his collaborative relationship with artist Robert Wilson. Indeed, Glass is the first composer to win a wide, multi-generational audience in the opera house, the concert hall, the dance world, in film and in popular music – simultaneously.
Philip Glass was born in Baltimore and began his musical studies at the Peabody Conservatory.  Later he attended the University of Chicago and the Juilliard School of Music where he studied composition with Vincent Persichetti.  Glass is best known for his works since 1967, which are strongly influenced by East Indian music and employ techniques of extending and contracting rhythmic figures in a stable diatonic framework.  Along with Steve Reich, Glass is a leading exponent of the minimalist style in music.
ANNAPOLIS BRASS QUINTET ARTISTS SERIES
​PERFORMANCE
​April 20, 1986
PHILIP GLASS
BRASS SEXTET
1) Hymn  2) Ballad  3) Finale
A variety of instrumentations for Philip Glass's Brass Sextet are suggested by the composer, one of which is the present combination of two trumpets, horn, two trombones, and bassoon.

Brass Sextet (1962-64) is something of a curiosity. It was written when Philip Glass, after graduating from the Juilliard School of Music, was composer-in-residence with the Pittsburgh Public Schools as part of a Ford Foundation project.  This was several years before he would become known for the repetitive minimalist techniques which launched him to fame.  Brass Sextet is one of very few pre-minimalist works by Glass to escape being withdrawn by the composer.
​
Philip Glass bio. compliments of philipglass.com
TAP to See and Hear "5 Miniatures for 5 Brasses" by Robert Washburn
FOSTERING BRASS CHAMBER MUSIC

The score and parts for Philip Glass's Brass Sextet, along with the entire ABQ music library,
​are available for research and performance from the Oberlin Conservatory.
For direct access to the Annapolis Brass Quintet Collection @ Oberlin
Tap Here
Proudly powered by Weebly