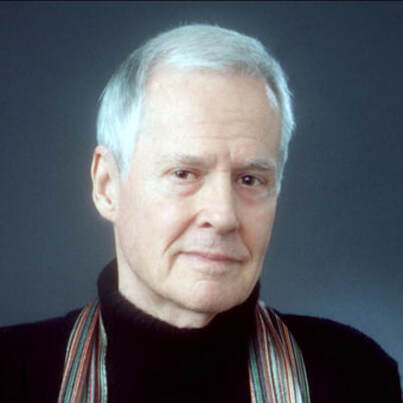 Ned Rorem: American Composer
​
​Words and music are inextricably linked for Ned Rorem.  Time magazine has called him "the world's best composer of art songs," yet his musical and literary ventures extend far beyond this specialized field.  Winner of the Pulitzer Prize and a Grammy, Rorem has composed three symphonies, four piano concertos, and an array of other orchestral works; music for numerous combinations of chamber forces; ten operas; choral works of every description; ballets and other music for the theater; and literally hundreds of songs and cycles. He is the author of sixteen books, including five volumes of diaries and collections of lectures and criticism.

At age seventeen, Rorem entered the Music School of Northwestern University and two years later received a scholarship to the Curtis Institute in Philadelphia. He studied composition under Bernard Wagenaar at Juilliard, where he earned both his Bachelor’s and Master’s degrees. Read More
Ned Rorem's Diversions

This work is the result of a Wallace Foundation/Readers Digest commission.

It was written for a consortium of ensembles including the Annapolis Brass Quintet.  Much of Diversions hints at earlier times and places, most strikingly Paris of the 1920's.  While much of the allusion is tongue in cheek to be sure, there is a vaguely nostalgic quality that yearns in earnest for that simpler, happier time.

Duration (22:46)
To Listen Tap Audio Bar >
There may be a slight pause before sound begins.
Diversions for brass quintet features a playful
array of duos, trios, and quartets in 14 movements:
Diversions for brass quintet was composed in Nantucket and Manhattan, mostly during the fall of 1989. The name "Diversions" is used in the current French sense of divertissements or desserts, rather than in the archaic sense of variations. The pieces are unrelated, even unconnected (except by virtue of planned contrast), and thus may be performed singly, or in little suites, according to taste.

The score and parts for Ned Rorem's Diversions for brass quintet, along with the entire ABQ music library, are available for research and performance from the Oberlin Conservatory of Music Library.
Direct access to the Annapolis Brass Quintet Special Collection @ Oberlin
Tap Here
Proudly powered by Weebly