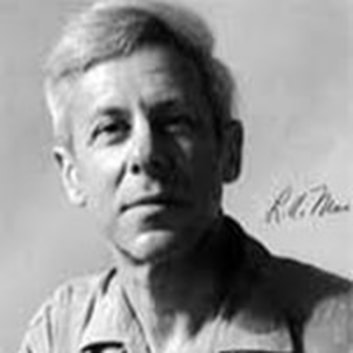 ​Comments about "FLIGHT" by the composer

​"I composed Flight at the request of the Annapolis Brass Quintet, to whom it is affectionately dedicated.  The work is in two movements, the first of which, through legato chromatic scales and glissandi, seems to convey the idea of "flight".  The second movement begins in a more sombre mood and works its way through a series of increasingly rapid variations back to a brief recap of the first statement."
​READ MORE​
^
TAP ABOVE
​
To listen to this 1982 Live ABQ Concert Performance
University of California, Davis

​To listen to this 1983 ABQ Washington, DC
AmCam Recording

TAP BELOW  ​
V
Lawrence Moss Bio:
Born in 1927 in Los Angeles, he received his doctorate from the University of Southern California in 1957, and taught composition at Mills College and Yale University before serving as Director of Composition at the University of Maryland from 1969  until his retirement in 2015
​﻿READ MORE﻿
"The Annapolis Brass Quintet... one of the best groups that we have ever heard... one of magnificent technical virtuosity and with sensitive critical interpretations"- BARCELONA LA VANGUARDIA
The ensemble's annual U.S. tours, their brass symposiums, and the commissioning of new works by American composers have been instrumental in fostering the tremendous interest in brass chamber music that is now evident in our country.  ​
​READ MORE

Move To: SYMPHONIES by LAWRENCE MOSS
Performed by ABQ and AMERICAN CAMERATA For New Music
< BACK WELCOME HOME
FOSTERING BRASS CHAMBER MUSIC
The scores and parts for Flight and Symphonies by Lawrence Moss, along with the entire ABQ Special Collection, are available for study and performance from the Oberlin Conservatory of Music.
​
TAP for direct access to Special Collection @ Oberlin Conservatory Library
Proudly powered by Weebly