MICHAEL BROWN:  THE WALL
for brass quintet and organ

Michael Brown (b. 1962)  began his music training with vocal and choral music and later included study of the organ as well.  He received degrees in music composition from Ouachita Baptist University and the University of Colorado at Boulder.  Brown then enrolled in the DMA composition program at the Peabody Conservatory of Johns Hopkins University where he studied composition with Morris Moche Cotel. 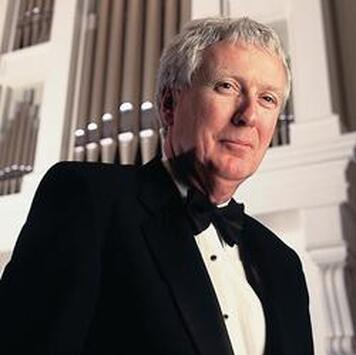 DONALD SUTHERLAND (1990) is Director of Music at Bradley Hills Presbyterian Church in Bethesda and is a member of the organ faculty of the Peabody Conservatory in Baltimore.  He has appeared frequently under the auspices of the American Guild of Organists in recitals and at regional conventions in the roles of recitalist, workshop leader and choral conductor.  Sutherland has frequently appeared on radio broadcasts for NPR and the BBC and ORF in Austria. He performs as organist and harpsichordist with the Theater Chamber Players of the Kennedy Center and has played with the National Symphony at the Kennedy Center and the Baltimore Symphony at Carnegie Hall.  Sutherland has performed both chamber music and solo recitals throughout the U.S. and in Europe.  In a recital at the Cathedral of Notre Dame in Paris, which included the European premiere of Olly Willson's  Expressions, Sutherland received a standing ovation for his performance.
​
DONALD SUTHERLAND retired from full-time teaching at the Peabody Conservatory of the Johns Hopkins University, Baltimore, Maryland, at the conclusion of the 2015-16 academic year.  He continues to teach on an adjunct basis. Sutherland has served on the Peabody organ faculty since 1986, where he acted as coordinator of the program. In 1997, he was given the Excellence in Teaching Award by the Johns Hopkins Alumni Association. An active member of the American Guild of Organists, Sutherland served three terms as national secretary. He is the music director emeritus at Bradley Hills Presbyterian Church in Bethesda, Maryland, where he served in the music ministry for 25 years.  Reflecting upon his retirement, Donald Sutherland says: “For me, Peabody has always been about the students. Some of them might say that I gave a lot to them, but I would say that it was nothing compared to what they have given me.”
ANNAPOLIS BRASS QUINTET 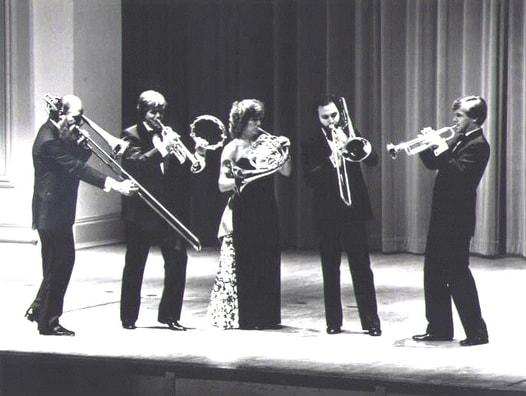 ​The Annapolis Brass Quintet was organized in 1971 as America's first full-time performing brass ensemble. During the course of its twenty-two year career, the Annapolis Brass Quintet concertized in all fifty states and throughout Europe, the Orient, the Middle East, Central America and Canada. The ensemble earned an international reputation for its dedication to excellence in the presentation of brass chamber music.
ANNAPOLIS BRASS QUINTET 1990 Photo
L to R:   Robert Posten, David Cran,
​Sharon Tiebert, Wayne Wells, Robert Suggs
The Wall
for brass quintet and organ
composed in 1990 by
Michael Brown
commissioned by the
Brass Chamber Music Society of Annapolis

Michael Brown's comments about his work:
"The title The Wall is less political statement than reference to the variety of difficulties faced in everyday life.  This work explores some of the possibilities for interaction between the quintet and organ including both antiphonal effects and exploration of the wide range of timbral colors."
​
One might assume Brown's choosing to title his work The Wall was more than mere coincidence to the "fall of the Berlin Wall" on 9 November 1989.  Just three months prior to that historic event, the members of the (East) Berlin Brass Quintet and the (West) Berlin Brass Quintet, who had never met nor ever performed together, did so for the first time ever.  That occasion took place in Baltimore, Maryland, at the International Brass Quintet Festival, hosted by the Annapolis Brass Quintet--an historic political and musical statement.

The score and parts for Michael Brown's The Wall for brass quintet and organ, along with the entire ABQ music library, are available for research and performance through Oberlin Conservatory of Music.
For direct access to the Annapolis Brass Quintet Special Collection @ Oberlin
Tap Here
​9 NOVEMBER 1989: The Fall of the Berlin Wall
'The Gates in the Wall Stand Open Wide.' What Happened the Day the Berlin Wall Fell
Proudly powered by Weebly