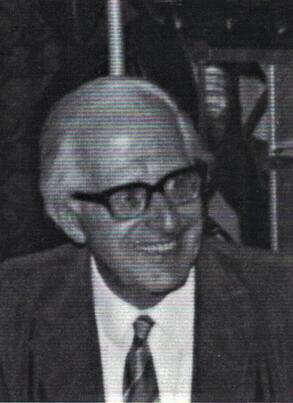 KARL PILSS (1970)
Pilss's  Scherzo was written originally for a brass quintet made up of three trumpets (one of whom was Helmut Wobisch) and two trombones and was given its initial performance in a 1940 Austrian RAVAG Radio broadcast. After hearing the Annapolis Brass Quintet performance of the piece recorded for the Vienna ORF national broadcasting station in 1975, he wrote his Capriccio for us the following year and came to the radio studio session later that year where we met him and recorded his new work, which we also performed in a concert in Vienna’s Brahmssaal. We continued to maintain correspondence with him until his death in 1979.
Scherzo by Karl Pilss
​Vienna, Austria
November 5, 1975

Austrian Radio (ORF) Broadcast Recording
Duration: 02:37
Tap > Below
(There may be a slight delay before sound begins.)
Karl Pilss (1902-1979) grew up in Vienna with the sound of brass instruments, since his father was an amateur horn player in a postal workers band.  His own chosen instrument was the piano and he soon earned a reputation as a piano soloist and accompanist. He also developed a life-long dedication to choral music. With his friend Friedrich Grossman, he helped to establish the Vienna Choral Society. At the Vienna Academy of Music (where he eventually became a professor) he studied composition with his principal mentor, Franz Schmidt, the last of the great Romantic symphonists.

Pilss began a long and illustrious association with the Vienna State Opera in 1930, initially as a volunteer assistant director of the chorus and subsequently as the principal singers coach. In this position, he had close professional relationships with the greatest singers and conductors of the time, including Elizabeth Schwartzkopf, Karl Böhm, Arturo Toscanini, and Richard Strauss. They all held him in high regard.

​In 1934, Pilss composed his first work for trumpet, a concerto written for Franz Dengler, the principal trumpeter with the Vienna Philharmonic. The following year he dedicated his Sonate for trumpet and piano to a young student of Dengler, Helmut Wobisch. Both of those works are unique examples of major works for the instrument in the post-Romantic style with solid craftsmanship showing off the character of the trumpet to great effect. Pilss also wrote concertos for horn and bass trombone.
Capriccio by Karl Pilss
Munich, Germany
November 27, 1978

​Bavarian Radio (BR) Broadcast Recording
Duration: 03:38
Tap > Below
(There may be a slight delay before sound begins.)
Wobisch would later succeed his teacher in the VPO and later made the first landmark recording of the complete Haydn Trumpet Concerto. In the early 1970‘s on a visit to Vienna, the American brass music publisher Robert King met with Wobisch and Pilss who supplied him with manuscripts of several of Pilss’s works for brass. King would soon publish a few of them, but held off on publishing many of the more ceremonial works which had been written for a large brass ensemble made up of members of the major Viennese orchestras. In 1939 the ensemble became officially designated as the Trompeterchor der Stadt Wien (Brass Choir of the City of Vienna). Although the group had the worthy goal of increasing the repertoire and showcasing the work of contemporary Austrian and German composers, given the circumstances of the Nazi era, it had a number of high profile appearances of a distinctly political nature. Pilss became a virtual house composer for the organization, writing approximately 50 pieces for it, and Richard Strauss consulted with him before writing his Festmusik der Stadt Wien, a powerful work which was premiered by the Trompeterchor under the direction of the composer on the occasion of a commemoration of the fifth anniversary of Hitler’s triumphant entry into Vienna in 1938. King was therefore reluctant to publish the more fanfarish works which he feared would be met with disapproval by many sheet music merchants.
​
For all the occasions in which we gave public performances in Austria of Pilss’s works, the composer was in attendance and was given warm and heartfelt ovations by the audiences in appreciation for his many years of devoted service to the musical life of Vienna.
~ by Robert Suggs

The score and parts for Scherzo and Capriccio by Karl Pilss, along with the entire ABQ music library, are available for research and performance from the Oberlin Conservatory of Music Library.
Direct access to the Annapolis Brass Quintet Special Collection @ Oberlin
Tap Here​​
Proudly powered by Weebly