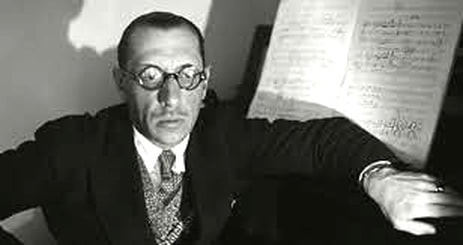 Born in Russia, Igor Stravinsky (1882-1971) was set to become an attorney until he studied composition with Nikolai Rimsky-Korsakov. He began his career in Paris with three ballets composed for Sergei Diaghilev, choreographer of Ballets Russes: The Firebird in 1910, Petrushka in 1911 and The Rite of Spring in 1913, which is legendary for causing a riot at its premiere.

The Rite of Spring especially was a model of neo-primitivism, in which Stravinsky used very small cells of notes to create instrumental textures that often featured intense, driving rhythms.  In the 1920s he abruptly abandoned his primitivist style and began writing  neo-classical music, which at first astounded his contemporaries, although not nearly as much as his turning to serialism in the 1950s.

In 1939 Stravinsky moved to the United States and America welcomed him as a prestigious guest. He wrote, recorded, lectured and directed constantly while continuing to create performances worldwide.  In 1940 Stravinsky married his second wife, Vera de Bosset and moved to Hollywood, California where, in 1945, he became an American citizen.  In 1969 he and his wife moved to New York, where Stravinsky  died on April 6, 1971 at the age of 88.  He was buried in Venice, on the Island of San Michele, near his friend and companion-in-exile Sergei Diaghilev, who had first sensed Stravinsky's genius and revealed it to the world.

Igor Stravinsky stands as a towering figure and perhaps the most influential composer of the twentieth century.  His 1923 Octet for wind instruments signaled a sudden marked change in his composition style from his Russian primitivist compositions, which brought him fame to his French neoclassical compositions,  which would influence composers everywhere for decades to come.
Octet
for wind instruments by
Igor Stravinsky
​Stravinsky wrote the Octet (he also called it the Octuor) in 1922-23.
The following remarks by Stravinsky are excerpted from Robert Craft's "Conversations with Stravinsky."

"The Octuor began with a dream.  I found myself (in my dream state) in a small room surrounded by a small number of instrumentalists who were playing some very agreeable music.  I did not recognize the music they played, and I could not recall any of it the next day, but I do remember my curiosity--in the dream--to know how many the musicians were.  I remember, too, that they were playing bassoons, trombones, trumpets, a flute, and a clarinet.  I woke from this little dream concert in a state of delight, and the next morning I began to compose the Octuor--a piece I had not so much as thought of the day before (though I had wanted for some time to write a chamber ensemble piece - not incidental music like L'Históire du Soldat, but an instrumental sonata.)"

"I conducted the first performance of the Octuor ​myself, and I was extremely nervous about doing so as it was the first work of mine I did introduce myself.  The stage of the Paris Opera seemed a large frame for only eight instruments, but we were set off by a wall of screens, and the piece sounded well."

Aaron Copland, who attended the October 18, 1923 premiere, later wrote of his experience with the work: "I can attest to the general feeling of mystification that followed the initial hearing.  Here was Stravinsky...now suddenly, without any seeming explanation, making an about-face and presenting a piece to the public that bore no conceivable resemblance to the individual style with which he had hitherto been identified."

The exact moment of recapitulation is hard to place: Stravinsky not only mirrors the restatement of his themes in the second half of the movement, he also deceives the listener by stating only part of the primary theme toward the end, before finally giving the theme one last full airing at the very end of the movement.

The second movement is a fairly straightforward theme and variations.  It segues to the third movement, a sort of rondo that is based on a Russian dance rhythm.

In discussing his Octuor ​shortly after its first performance, Stravinsky said:
​"Form, in my music, derives from counterpoint.  I consider counterpoint as the only means through which the attention of the composer is concentrated on purely musical questions. Its elements also lend themselves perfectly to an architectural construction."
​
​Portions of the above notes were excerpted from:
Robert Craft's Conversations with Stravinsky
Andy Pease's Wind Band Literature, January 3, 2013
BCMSA: ABQ Artists Series Program Note, April 20, 1986  ​
​________________
FOR ACCESS TO
​"THE EXAMINATION OF IGOR STRAVINSKY'S OCTET FOR WIND INSTRUMENTS"
TAP HERE
FOSTERING BRASS CHAMBER MUSIC

The score and parts for Igor Stravinsky's Octet for wind instruments, along with the entire ABQ music library, are available for research and performance from the Oberlin Conservatory of Music Library.
For direct access to the Annapolis Brass Quintet Special Collection @ Oberlin
Tap Here
Proudly powered by Weebly