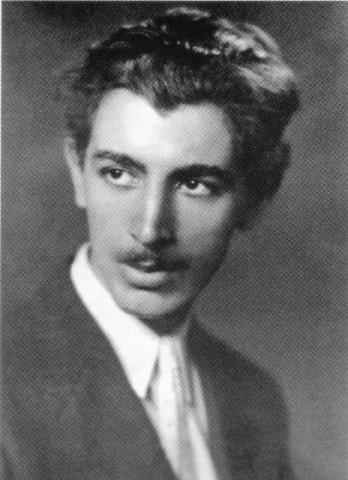 Composer Alan Hohvaness (born as Alan Vaness Chakmakjian in 1911)
Hovhaness was born Alan Vaness Chakmakjian in the affluent Boston suburb of Somerville, Massachusetts in 1911. His Armenian father, Haroutioun Hovanes Chakmakjian, came from Adana (today's Turkey) his mother, Madeleine Scott, was of Scottish ancestry ensured he was known simply as Alan Scott Vaness, which is the name seen on his earliest music.  After his mother's death in 1931, the composer used the surname Hovaness (after his paternal grandfather) later adding an 'h' after the 'v' around 1942, and so becoming Hovhaness with the accentuation on the second syllable.

Without any special encouragement, Hovhaness was drawn to music by the age of 4 and received his first piano lessons around the age of 7, by which time he was already improvising and composing with his own notation. His intellectual prowess was considerable - from a young age he was receptive to art, literature and philosophy, not just music. Later in life, he claimed some mystical experiences had brought him whole musical sections (such as part of Mysterious Mountain and the long theme to Fra Angelico). The mystical and religious preoccupations of many works reflect a pantheistic spiritual outlook.  READ MORE:  Alan Hovhaness Biographical Summary by Marco Shirodka
Sharagan & Fugue was composed in 1947
(03'37")
​
​Tap > Below
(​There may be a brief pause before sound begins.)
FOSTERING BRASS CHAMBER MUSIC

The score and parts for the Alan Hovhaness Sharagan and Fugue for brass quintet, along with the entire ABQ music library, are available for research and performance from the Oberlin Conservatory.
Direct access to the Annapolis Brass Quintet Special Collection @ Oberlin
Tap Here​​​
Proudly powered by Weebly