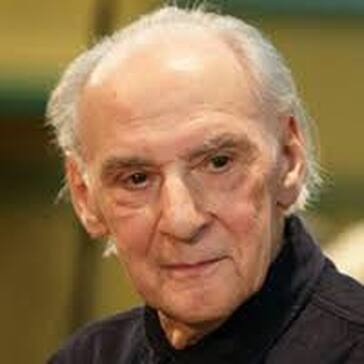 Joseph Horovitz was born in Vienna in 1926 and emigrated to England in 1938. He studied music at New College, Oxford, with Gordon Jacob at the Royal College of Music where he won the Farrar Prize, and for a further year with Nadia Boulanger in Paris. The Festival of Britain in 1951 brought him to London as conductor of ballet and concerts at the Festival Amphitheatre. He then held positions as conductor to the Ballets Russes, associate director of the Intimate Opera Company, on the music staff at Glyndebourne, and as guest composer at the Tanglewood Festival, USA. His compositions number twelve ballets, nine concertos, two one-act operas, chamber music, works for brass  Read More
Music Hall Suite
Joseph Horovitz
(1964)
1) Soubrette Song,  2) Trick Cyclists,
3) Adagio Team, 4) Soft Shoe Shuffle
5) Les Girls
​
Annapolis Brass Quintet
Robert Suggs, trumpet;  David Cran, trumpet; Marc Guy, horn;
Wayne Wells, trombone; Robert Posten, bass trombone
1980 Munich, Germany
Recorded by Bavarian Radio
Duration: 09:10
This work was composed in 1964 at the request of the well known American tuba player Roger Bobo. It was soon taken into the repertoire of the Philip Jones Brass Ensemble, who gave the first BBC broadcast. The first recording was on Pye records, by the Hallé Brass Ensemble. Since then it has become a regular repertoire piece and recorded as well as broadcast all over the world.

The Suite consists of five movements, all illustrating aspects of the Burlesque Theatre, Music Hall, circus and cabaret, so popular at the end of the 19th century and into the 20th. The titles of the short movements are: Soubrette Song, Trick Cyclists, Adagio Team, Soft Shoe Shuffle and Les Girls.

The five orchestral brass instruments (two trumpets, horn, trombone and tuba) are exploited in a chamber music manner, but the cumulative effect has a theatrical quality in keeping with the title.
© Joseph Horovitz​
We are grateful to Bavarian Radio
for allowing brassquintetforum.com exclusive rights to publish this recording of
Joseph Horowitz Music Hall Suite as an audio stream solely for non-commercial purposes.
This Bavarian Radio broadcast recording is not to be downloaded.
FOSTERING BRASS CHAMBER MUSIC
​
The score and parts for Joseph Horowitz Music Hall Suite, along with the entire ABQ music library, are available for research and performance from the Oberlin Conservatory Library.
For direct access to the Annapolis Brass Quintet Special Collection @ Oberlin
Tap ​Here
Proudly powered by Weebly