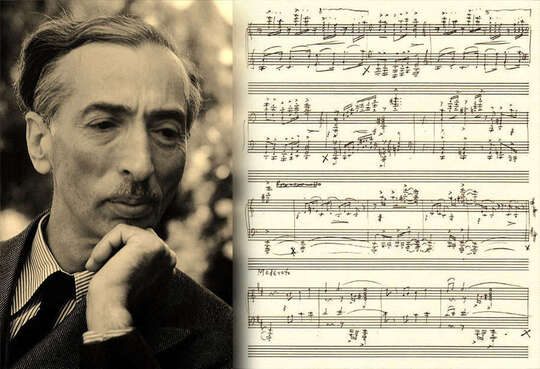 EUGENE ZÁDOR was born in the village of Bátaszék, Hungary, on  November 5, 1894.  Zádor studied piano and composition at the Conservatory in Pécs. In 1911,  he entered the Vienna Conservatory where he studied composition with Richard Heuberger.  There he wrote his first work for orchestra, which was performed in Budapest when he was just seventeen.

​In 1934 he received the Hungarian National Prize for his Piano Quintet. ​1935 was a very important year in Zádor's life. His ​Hungarian Caprice was premiered by the Budapest Philharmonic Orchestra, he was awarded honorary doctorates from the Budapest Royal Academy of Music and from the New York College of Music, and in 1935 he met a young piano student, Maria Steiner, who would become his wife though not until 1946.

On March 12, 1938, the same day Germany annexed Austria, Zádor fled to Budapest where he remained until he received a written offer to work at the  New York College of Music.  This allowed him to obtain a visa, and on March 25, 1939 he boarded the Normandie and began his five-day voyage to New York. Among the manuscripts he brought with him was the score for his new opera, Christopher Columbus.  Read More
Eugene Zádor's Quintet for Brass ​(1973)
This work was premiered and recorded by the Modern Brass Quintet of Los Angeles.
According to Winthrop Sargeant's New Yorker record review of this work, Zádor's "style of composition, which reminds one of Bartók, is non-serial, easy to take, and he is given to elaborate but tightly knit forms and extraordinarily imaginative orchestration.  Eugene Zádor is one of the most important composers to come out of Hungary since Béla Bartók."
Annapolis Brass Quintet
Robert Suggs, trumpet; David Cran, trumpet; Arthur LaBar, horn;
Martin Hughes, trombone; Robert Posten, bass trombone
Performance of
Eugene Zádor's
Quintet for Brass
Munich, Germany 27 November 1978
Recorded for Broadcast by Bavarian Radio
To listen​ ​
​Tap > Below
(There may be a slight pause before sound begins.)
Quintet for Brass
Comprised of five sections:
1) Preludium  2) Hungarian Scherzo
3) Peasant Dance  4) Song
5) Rondo-Finale
(Duration: 17:44)
We are grateful to Bavarian Radio
​for allowing  BrassQuintetForum.com exclusive rights to publish this recording of Eugene Zádor's
Quintet for Brass as an audio stream solely for non-commercial purposes.
This Bavarian Radio broadcast recording is not to be downloaded.
FOSTERING BRASS CHAMBER MUSIC

The score and parts for Eugene Zádor's Quintet for Brass, along with the entire ABQ music library, are available for research and performance from the Oberlin Conservatory of Music Library.
For direct access to the Annapolis Brass Quintet Special Collection @ Oberlin
Tap Here
Proudly powered by Weebly