Charles Collier Jones was born in Boston in 1928 and grew up in Cambridge and Rockport, Massachusetts. He graduated from Yale University in 1952 where he majored in trumpet and studied composition with Paul Hindemith. After two years as a trumpeter in the 173rd Army Band, Jones went on to graduate studies at Brandeis University, where he studied with Irving Fine and Leonard Bernstein, and at New England Conservatory, where he studied with Francis Judd Cooke.

Jones supported his family as a commercial lobster fisherman.  In his retirement he taught sailing.  C. Collier Jones, 84, died on July 11, 2013 in Punta Gorda, Florida. 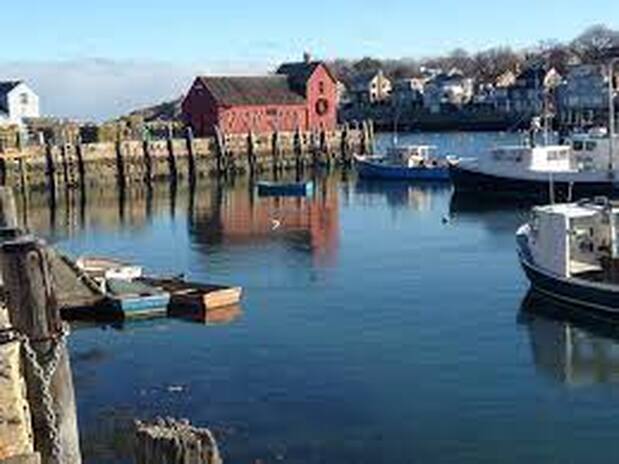 Cape Ann includes the city of Gloucester and the towns of Essex, Manchester-by-the-Sea and Rockport.
C. Collier Jones:
Two works for brass quintet
In the mid 1950's when the modern brass quintet was in its infancy, Collier Jones was a great sensation.  It seemed his 1957 Four Pieces for Five Brass was being played and talked about by almost everyone in the business.  This in itself is not so amazing, because the field of competition was small in those pioneer days.  But as time passed and the number of works for brass quintets increased by at least a hundred fold, Jones' work endured.  It had endured so well, in fact, that some thirty years after its composition his piece was listed by the International Trumpet Guild as one of the most performed works for brass quintet.

This January 28, 1977 ABQ performance of Four Pieces for Five Brass by Collier Jones was at the University of Wisconsin, Eau Claire.  This concert also served as a catalyst for an article on the popularity of chamber music in America which appeared on the front page of the Wall Street Journal.
Annapolis Brass Quintet
(1977)
David Cran, trumpet; Robert Suggs, trumpet;
Arthur LaBar, horn; Tim Beck trombone;
Robert Posten, bass trombone

Tap > Below
(There may be a slight delay before sound begins.)
It wasn't until the mid-1980's that Collier Jones approached the Annapolis Brass Quintet with a sketch of what is now part of the second movement of his Suite 'The Roadrunner'.  This shred of a piece was greeted with such enthusiasm by the quintet that the composer agreed to compose a suite for brass quintet.

C. Collier Jones finished ​Suite 'The Roadrunner' in the spring of 1987 and the work was premiered by the Annapolis Brass Quintet on October 16, 1988.

To listen to this October 16, 1988 premiere performance of
C. Collier Jones's Suite 'The Roadrunner'
(Duration 10' 55")
presented by the
​Brass Chamber Music Society of Annapolis

Tap > Below
(There may be a slight pause before sound begins.)
Suite 'The Roadrunner'
1. Moderato 2. Tranquillo
3. Giocoso 4. Chorale
"The Roadrunner"
​
FOSTERING BRASS CHAMBER MUSIC

The score and parts for Four Pieces for Five Brass ​and Suite 'The Roadrunner' by C. Collier Jones, along with the entire ABQ music library, are available for research and performance from the Oberlin Conservatory of music.
For Direct access to the Annapolis Brass Quintet Special Collection @ Oberlin
Tap Here​​
Proudly powered by Weebly