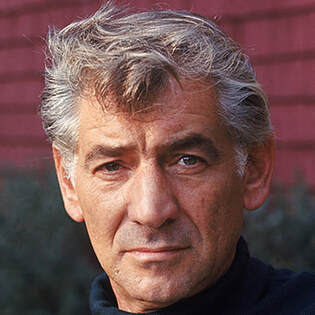 To listen to this ABQ 1991 performance of
Leonard Bernstein's Dance Suite
Duration 04'14"
​TAP > Below
(there may be a slight pause before sound begins)
DANCE SUITE 1989
1. Dancisca  2. Waltz  3. Bi-Tango  4. Two-Step  5. MTV
​
Each of the five movements of Dance Suite is dedicated to a choreographer-friend of the composer.  This short vibrant work is a significant contribution to modern brass quintet repertoire by one of the most influential musicians of the twentieth century.  Written in 1989,  Dance Suite was Leonard Bernstein's first composition for brass quintet and is also his final composition.
Leonard Bernstein--celebrated as one of the most influential musicians of the 20th century—ushered in an era of major cultural and technological transition. He led the way in advocating an open attitude about what constituted “good” music, actively bridging the gap between classical music, Broadway musicals, jazz, and rock, and he seized new media for its potential to reach diverse communities of listeners, young and old.

Longtime conductor of the New York Philharmonic, renowned composer of works for the concert hall and Broadway stage, glamorous television personality, virtuosic pianist, and committed educator, Bernstein was a multi-tasker long before the term was coined. Bernstein—or “Lenny,” as he was often affectionately called—was an extravagantly gifted musician with a common touch. He maintained a life-long focus on advocating for social justice, notably civil rights at home and peace around the world.

Bernstein’s restless creative vision defies traditional categories, with a limber affinity to combining styles and genres in unexpected ways. He wrote music that was often thoroughly accessible on the surface yet presented rewarding challenges for performers. In the process, he shaped works that appealed to musicians of all calibers.  Source:  Carol Oja, Harvard Scholar and Leonard Bernstein Scholar-in-Residence with New York Philharmonic.
Tap for Leonard Lebow page and to listen to his "Suite for Brass"
FOSTERING BRASS CHAMBER MUSIC
The score and parts for Leonard Bernstein's Dance Suite, along with the entire ABQ music library, are available for research and performance from the Oberlin Conservatory of Music.
For direct access to the Annapolis Brass Quintet Special Collection @ Oberlin
TAP HERE