Bernhard Heiden was born in Frankfurt-am-Main, Germany, on August 24, 1910 to Ernst and Martha (Heimer) Heiden.  He was admitted to the Hochschule for Musik in Berlin in 1929 and studied composition under Paul Hindemith, whom he considered his principal teacher. In 1933, his last year at the Hochschule, he was awarded the Mendelssohn Prize in Composition and was married in 1934 to Cola de Joncheere, pianist and fellow student at the Hochschule.
​
​Bernhard and Cola came to the United States in 1935 and Bernhard taught at Detroit, Michigan's Art Center Music School for eight years.  He also served as staff arranger for Detroit radio station WWJ, conducted the Detroit Chamber Orchestra, performed piano, harpsichord and chamber music recitals, and conducted music theatre productions at Wayne State University. [Read More]
Virginia M. Reinecke, a concert pianist, organist and teacher
By FREDERICK N. RASMUSSEN
THE BALTIMORE SUN | NOV 02, 2017
Virginia M. Reinecke, a Baltimore pianist and organist who entertained audiences for nearly seventy years and a co-founder of the "Music in the Great Hall" series, died October 20.  She was 97. "Virginia was a brilliant musician and a fine woman,” said Baltimore native Jim Rafferty, who studied piano with Miss Reinecke for more than 40 years. “She really was a genius.”​ 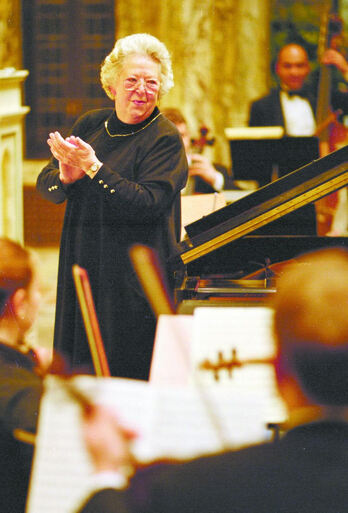 VIRGINIA REINECKE: PIANIST, ORGANIST, TEACHER
The daughter of Carl Reinecke, a tailor, and Lillian Reinecke, a seamstress, Virginia Reinecke began studying piano when she was six and soon afterward began playing the organ.  "Our whole family was musical, but we were poor," Reinecke said in a 1996 interview with The Sun.  "I had taken some piano lessons from the nuns at school and I loved music, but this was the Depression, and after a while there was just no money, so I thought I'd become a nun."

Reinecke's entry into the world of music came after she attended a piano concert with her mother.  She immediately set aside the notion of becoming a nun.  When she was seven she was awarded a full scholarship to the Peabody Conservatory Preparatory School.

After graduating from the Peabody Conservatory in 1940 Virginia Reinecke taught at the Peabody for nine years.  She performed as piano soloist with area orchestras and later performed extensively in the U.S., England, Germany, Poland, Russia and China.

Reinecke taught piano and organ at the Catholic University of America in Washington, D.C., directed the Trinity Preparatory School and Loyola College glee clubs and was director of the Children's Experimental Theatre in Baltimore.  In 1971 she co-founded the "Music in the Great Hall" Concert Series, (which is now the "Chamber Music Society of Maryland) and served as its artistic director for thirty years.
Bernhard Heiden's Sextet
Virginia Reinecke and the Annapolis Brass Quintet
St. Timothy's School, Pikesville, Maryland
1987 performance
​(Duration: 19:53)
To Listen Tap >Below
(There might be a 10 to 20 second delay before sound begins.)
Commissioned by the second International Brass Congress in 1983
SEXTET for brass quintet and piano by BERNHARD HEIDEN
I. Allegro moderato  II. Intermezzo: allegretto
III. Adagio  IV. Allegro con spirito
​
“Virginia Reinecke was truly a Baltimore icon and a most relevant musician and performer,” said noted concert pianist Leon Fleisher  “She was quite extraordinary.”

In 2013, after a shoulder replacement and still dealing with arthritis, Miss Reinecke, who was then 93, gave a recital for friends and students in her home.  She said, “I think life is a commission to be.
If I can do it, I must.  It’s a calling."
THE BALTIMORE SUN
FOSTERING BRASS CHAMBER MUSIC

The score and parts for Bernhard Heiden's  Sextet for brass quintet and piano, along with the entire ABQ music library, ​are available for research and performance through the Oberlin Conservatory.
For direct access to the Annapolis Brass Quintet Collection @ Oberlin
Tap Here
Proudly powered by Weebly