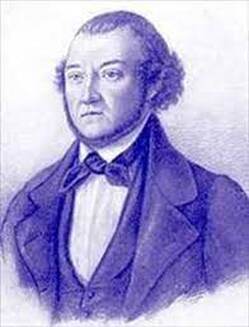 Russian composer Alexander Alyabyev
Alexander Aleksandrovich Alyabyev  (also rendered as Alabiev or Alabief) was born on August 5, 1787 to a wealthy family in the town of Tobolsk, founded in 1587 as one of the first settlements in Siberia.  As a child Alexander Alyabyev had all of the privileges that growing up in a cultivated family in late 18th century Russia could provide.  He received an excellent education, was given piano lessons at an early age, ate his fill of the best foods and always had a kopeck or two in his pocket.

Alyabyev joined the Russian Army in 1812 during the Napoleonic War, participated in the entry by Russian forces into Dresden and Paris, and served as an officer until his discharge in 1823.  In February 1825 Alyabyev and three others took part in an all-night card game which ended with retired colonel T.M. Vremev being accused of cheating.  He was then struck first by Alyabyev and also by the two other players. The colonel died a few days later, possibly from a ruptured spleen, and Alyabyev was arrested on a charge of murder.  While the evidence was not entirely conclusive, it was apparently convincing enough to cause his imprisonment and later exile to Siberia at the express order of Nicholas I.  Freed in 1831, he spent some years in Caucasus before returning to Moscow.

From the appearance of Alyabyev's first important composition, a string quartet in 1815, his output as a composer was virtually uninterrupted--he is even known to have composed vaudevilles while in prison.  He composed seven operas, twenty musical comedies, a symphony, three string quartets, more than 200 songs, and at least one brass quintet which he never finished.   In fact the present quintet had been either lost or disregarded until 1960, when it was completed and edited by the Soviet musicologist, Yusov.
ALEXANDER ALABIEV
BRASS QUINTET
​
Performed by the
ANNAPOLIS BRASS QUINTET
November 15, 1987
Robert Suggs, trumpet;  David Cran, trumpet;
Arthur Brooks, horn;  Wayne Wells, trombone;
Robert Posten, tuba
​
(Duration: 07' 40")

To listen Tap> Below
(There may be a slight delay before sound begins.)

The score and parts for Alexander Alabiev's  Brass Quintet, along with the entire ABQ music library, are available for research and performance from the Oberlin Conservatory of Music Library.
Direct access to the Annapolis Brass Quintet Special Collection @ Oberlin
Tap Here​​
Proudly powered by Weebly