Tap > Below
(​There may be a slight pause before sound begins.)
Jack McKie
​THEME FOR A CAROUSEL

(Duration: 02:59)
Tap > Below
(​There may be a slight pause before sound begins.)
Lawrence Moss​
​MUSIC FOR FIVE

Lawrence Kenneth Moss (b. Los Angeles, 1927) is an American composer and teacher. Moss earned his Ph.D. from the University of Southern California in 1957 where he studied with Leon Kirchner (1919-2009). He served as a composition professor at Mills College (1956-1958), Yale University (1960-1968), and the University of Maryland (1969-2014). The University of Maryland's Moss Collection consists of scores, sketches, audio and visual recordings, programs, reviews, publicity, correspondence, books and materials related to his teaching career.

To listen to Music for Five by Lawrence Moss
​performed by the
Annapolis Brass Quintet
(Duration: 02: 53)
​
Tap > Below
(​There may be a slight pause before sound begins.)
Paul Hindemith
​MORGENMUSIK

Paul Hindemith, (born November 16, 1895, Hanau, near Frankfurt am Main, Germany—died December 28, 1963, Frankfurt am Main), was one of the principal German composers of the first half of the 20th century and a leading musical theorist. He sought to revitalize tonality—the traditional harmonic system that was being challenged by many other composers—and also pioneered in the writing of Gebrauchsmusik, or “utility music,” compositions for everyday occasions. He regarded the composer as a craftsman (turning out music to meet social needs) rather than as an artist (composing to satisfy his own soul).  As a teacher of composition he probably exerted an influence on most of the composers of the generation that followed him. 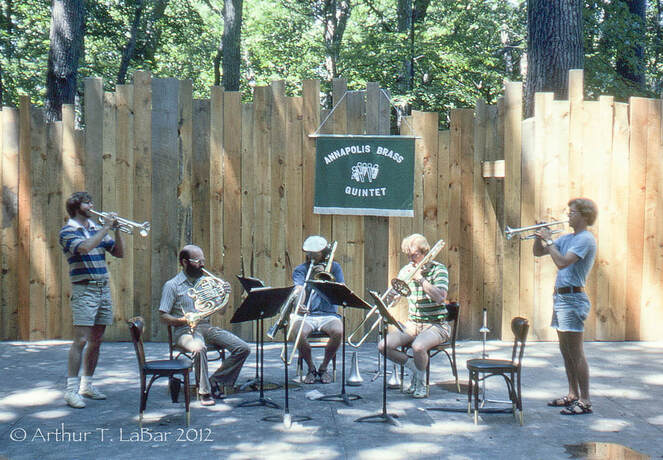 ​Tap > Below
(​There may be a slight pause before sound begins.)
Giovanni Gabrieli
​CANZON per SONARE DUODECIMI TONI

Giovanni Gabrieli, (born 1556?, Venice, Italy—died 1612, Venice), Italian Renaissance composer, organist, and teacher, celebrated for his sacred music.  After 1587 Giovanni’s principal publications were the two immense Sacrae symphoniae of 1597 and 1615, both of which contained purely instrumental music for church use or massive choral and instrumental motets for the liturgy. He usually conceived the music for separated choirs and showed an increasing tendency to specify which instruments were to be used and which choirs were to consist of soloists and full choir, as well as to distinguish the musical style of each, thus initiating a completely new approach to the creation of musical colour and orchestration.

​Tap > Below
(​There may be a slight pause before sound begins.)
Introduction by Robert Nagel,  trumpeter and founding member, NY Brass Quintet:  (READ MORE)
FOSTERING BRASS CHAMBER MUSIC
​
The score and parts for each of the above works, along with the entire ABQ music library, are available for research and performance from the Oberlin Conservatory of Music.