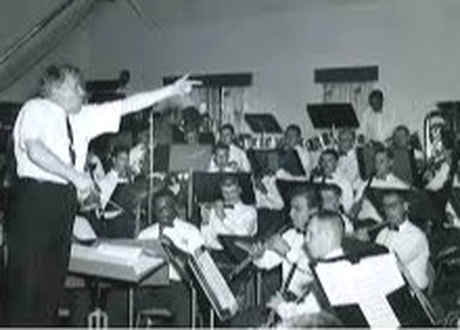 Internationally renowned composer Vaclav Nelhybel was born on September 24, 1919, in Polanka, Czechoslovakia. He studied composition and conducting at the Conservatory of Music in Prague (1938-42) and musicology at Prague University and the University of Fribourg, Switzerland. After World War II he was affiliated as composer and conductor with Swiss National Radio and became lecturer at the University of Fribourg. In 1950 he became the first musical director of Radio Free Europe in Munich, Germany, a post he held until he immigrated to the United States in 1957. Thereafter, he made his home in America, becoming an American citizen in 1962. After having lived for many years in New York City, he moved to Ridgefield and Newtown, Connecticut, and then, in 1994, to the Scranton area in Pennsylvania. During his long career in the United States he worked as composer, conductor, teacher, and lecturer throughout the world. At the time of his death on March 22, 1996, he was composer in residence at the University of Scranton.  (continues---U of Scranton website   0
______Alt short bio:
VACLAV NELHYBEL  (1919 - 1996)
Václav Nelhýbel was born in Czechoslovakia and studied at the Prague Conservatory. He moved to the United States in 1957 and became a citizen in 1962. Fanfares is a greatly abridged adaptation for band of the Overture from the opera Libuše by Bedřich Smetana (1824–1884). Along with Antonín Dvořák, Smetana is considered to be one of the leading figures of Czech music. Like many composers of Czech heritage, Václav Nelhýbel considered Smetana to be a great musical influence.
Vaclav Nelhybel's ​Divertimento  ​
for brass quintet & orchestra

The score and parts for Vaclav Nelhybel's Divertimento for brass quintet and orchestra, along with
​the entire ABQ music library, are available for research and performance from the
Oberlin Conservatory of Music Library.
TAP for direct access: ABQ Special Collection @ Oberlin Conservatory Library
Proudly powered by Weebly