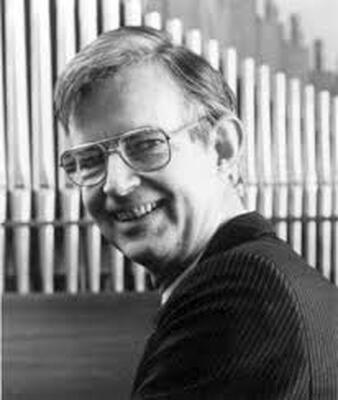 Daniel Pinkham was born in Lynn Connecticut.  His great-grandmother was Lydia E. Pinkham, who gained fame for her Vegetable Compound patent medicine, a solution of herbs, roots and 18 percent alcohol aimed at curing “female complaints.” Mr. Pinkham often told the story of Mae West, who after drinking her first bottle said, “I feel like a new man.”

​He attended Phillips Academy in Andover, Mass. It was there that he heard the Trapp Family Singers and was deeply affected. “Here, suddenly, I was hearing clarity, simplicity, thin textures,” he said in a 1981 interview with The Boston Globe. “It shaped my whole outlook.” He attended Harvard College and studied with Walter Piston and Aaron Copland.

Daniel Pinkham created his unique "sound" from varieties of energetic, propulsive rhythms and brilliant polyphony, while preserving a sophisticated, appealing, and modern harmonic sensibility that thoroughly suits his often subtle religious subjects.    His instrumental training was with the legendary Wanda Landowska, who taught him harpsichord, and with the equally famous E. Power Biggs, with whom he mastered the organ.

In 1958 he became music director at Boston's King’s Chapel where he served for forty-two years, and in 1959 he joined the faculty of the New England Conservatory where he taught composition and music theory and served as department chair for the performance of early music for almost fifty years.

Much of Pinkham's church music was written for King’s Chapel, and he often wrote the texts himself. The church’s minister, the Rev. Earl Holt, pointed out on Mr. Pinkham’s death in 2006 that one of his lines, from “Uncommon Prayers,” read, “And, at our journey’s end, grant, O God, a gentle landing.”
______
The above bio. includes excerpts from Bruce Duffie's April 3, 1987 Pinkham interview, and from Daniel Wakin's Dec. 21, 2006 NYTimes Pinkham obit.
Annapolis Brass Quintet

Daniel Pinkham's
"Prelude, Adagio and Chorale"
Duration: 08:50
​To listen Tap > Below
​(There may be a 10 to 20 sec. delay before sound begins.)
​To listen to Vitrail  by  Georges Delerue ​
TAP HERE
​
FOSTERING BRASS CHAMBER MUSIC

The score and parts for Daniel Pinkham's Prelude, Adagio and Chorale, along with the entire ABQ music library, are available for research and performance from the Oberlin Conservatory of Music Library.
For direct access: ABQ Special Collection @ Oberlin Conservatory Library
Tap Here
Proudly powered by Weebly