FANFARE (1943) by MICHAEL TIPPETT
Sir Michael Tippett (born Jan. 2, 1905, London, Eng. — died Jan. 8, 1998, London) was one of the leading English composers of the 20th century.
​
The English composer Michael Tippett came to music relatively late in life.  He produced the first acknowledged work only at age 30 and failed to attract much public notice until he was nearly 40.  However, he has come to be regarded as one of the most original figures in 20th century music.  His originality derives particularly from his rhythmic language, his complex tonal harmony and his highly individual interpretation of 20th century neoclassicism.  The present fanfare is the earliest of a group of three brass fanfares composed over a ten year period of 1943 to 1953.
To listen to Michael Tippett's Fanfare
(Duration: 02' 11")

Tap > Below
(There may be a slight delay before sound begins.)
ANGELS (1921) by CARL RUGGLES
Charles Sprague Ruggles (born March 11, 1876, Marion, MA— died Oct. 24, 1971, Bennington, VT.) was an American composer whose musical works are characterized by highly dissonant, nonmetric melodies, and rich colouring.

Tap > Below
(There may be a slight delay before sound begins.)
American composer Carl Ruggles,at age 95, was one of the last survivors of the pioneering generation of modern music.  His output as a composer is limited to a handful of highly worked, intense, visionary pieces.  The titles--​Angels, Men and Mountains, Sun Trader, Evocations--suggest the temper of the music.  Angels was revised in 1938 to the present version.  It is densely woven, difficult, unyielding, but highly expressive in its constant and uncompromising reach toward the sublime.
DREI EQUALE (1812) by
LUDWIG VAN BEETHOVEN
(1770 - 1827)
Drei Equale für vier Posaunen (Three Equals for four trombones)
Equale were pieces written for equal, or similar, instruments. In the eighteenth century they were almost always used for funeral services and usually employed a quartet of trombones. Beethoven was commissioned to write these three pieces in 1812 for All Soul's Day at the Linz Cathedral in Austria. They are the most famous of all equale, perhaps simply because they were composed by Beethoven.

Two of these equale were adapted to be sung by male voices at Beethoven's funeral. 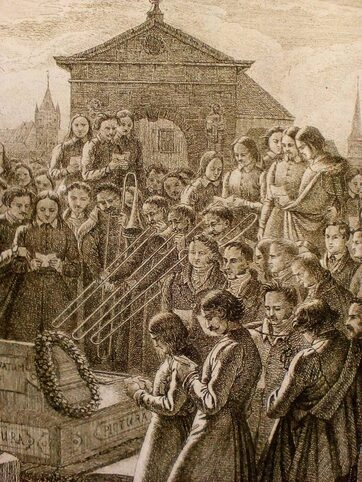 (Duration: 04' 49")
To listen tap > Below
(There may be a slight delay before sound begins.)​
FANFARE (1912) by PAUL DUKAS
Paul Dukas (born Oct. 1, 1865, Paris, Fr.—died May 17, 1935, Paris) was a French composer whose fame rests on a single orchestral work, his 1897 dazzling, ingenious L’Apprenti sorcier (The Sorcerer’s Apprentice).
A studious man of retiring personality, Paul Dukas was intensely self-critical, having abandoned and destroyed many of his compositions. Nevertheless, his works of music which have survived are widely admired.  The ballet La Péri, his last major composition, was written "for a bet" and finally published only under the insistence of friends who persuaded him not to destroy the work.  The Fanfare, unquestionably the most popular portion of the entire ballet, was added by Dukas only as an afterthought when the work was completed.
To listen to Paul Dukas' Fanfare from La Péri
(Duration: 02' 05")

Tap > Below
(There may be a slight delay before sound begins.)​​​
FEIERLICHER EINZUG (1909) by RICHARD STRAUSS
Richard Georg Strauss (born June 11, 1864, Munich, Germany—died September 8, 1949, Garmisch-Partenkirchen) was  an outstanding German Romantic composer of the late 19th and early 20th centuries.
​
Before Richard Strauss reached his 21st birthday he had heard his music interpreted by the outstanding German conductors of the day and had already been hailed as successor to Brahms and Wagner.  In his late 30's his interests turned from tone poems to opera where with Salome and Elektra he seemed to be in the forefront of musical advance.  But by his mid 40's, the same time at which the Feierlicher Einzug was composed, his style was already undergoing a retreat from that of some of his more adventurous earlier work.  Throughout his life Strauss seemed to compose for the brass instruments with special skill and enthusiasm.  His fascination and love for brass - particularly the horn - derives from the suitability of the instruments' sheer power to the fullness of his music, but also undoubtedly from the fact that for 40 years Strauss' father was principal hornist in the Munich Court Orchestra.
THE EARLE OF OXFORD'S MARCHE (1591) by
​WILLIAM BYRD
William Byrd (born 1539/40, London, England—died July 4, 1623, Stondon Massey, Essex, England) was an English organist and composer of the Shakespearean age who is best known for his development of the English madrigal.
​William Byrd belonged to the relatively small number of English artists who shaped Elizabethan culture.  Byrd, a prodigious composer, wrote music for every genre of his day. There are volumes of sacred songs suitable for both Catholic and Anglican worship, secular songs in English, pieces for soloists, works for viol ensembles, and collections of compositions for keyboard. In all of these genres, he excelled. 16th century music incorporated proficient elements of humanistic thought, innovation, commercial enterprise and related themes, most of which is self-evident in William Byrd’s work.
The Earle of Oxford's Marche
is one of the earliest examples of illustrative program music.
William Byrd - The Battell 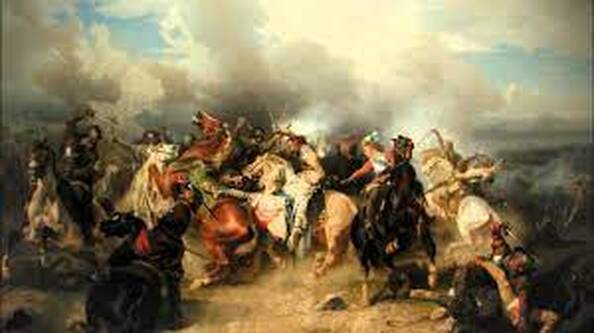