Robert Washburn's
​Brass Quintet
​Written in 1973
Robert Washburn (1928 - 2013) was an American composer born in Boucherville, N.Y. on July 11, 1928. He was awarded a Danforth Foundation Fellowship to complete a Ph.D. in composition at the Eastman School of Music, where he worked with Howard Hanson, Bernard Rogers and Alan Hovhaness.  Later studies included a summer at the Aspen Music School, where he studied with Darius Milhaud, and a season in Paris with Nadia Boulanger. He also participated in seminars at the Sorbonne in Paris and at the University of Oxford in England. 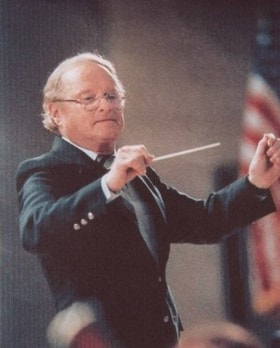 Dr. Robert B. Washburn '49 was a beloved member of The Crane School of Music family from his years as a student through his tenure as faculty member and dean. He was greatly admired and respected by hundreds of students and faculty members who studied and worked with him throughout his 50-year teaching career. As a composer, he touched many lives with his music, and his work continues to inspire people throughout the world.  Read More
​Annapolis Brass Quintet
(1975)
David Cran, trumpet; Robert Suggs, trumpet;
Calvin Smith, horn; Tim Beck, trombone;
Robert Posten, bass trombone.
performing

Tap Here.
​
Robert Washburn's
Concertino
for Wind  and Brass Quintets
​was composed in 1971.

The original reel-to-reel tape recording of this 1983 performance had been saved and stored in Robert & Ellen Posten's basement for 38 years before being digitized by Bob Suggs in 2021 to be included in these postings of ABQ performances.  We hope you can overlook some 'wobbly sound' sections in this recording.
FOSTERING BRASS CHAMBER MUSIC
​
The score and parts for Robert Washburn's Brass Quintet, Five Miniatures for Five Brasses and Concertino for Wind and Brass Quintets, ​along with the entire ABQ music library, are available for research and performance from the  Oberlin Conservatory of Music.
​
For direct access to the Annapolis Brass Quintet Special Collection @ Oberlin
Tap Here​​
Proudly powered by Weebly